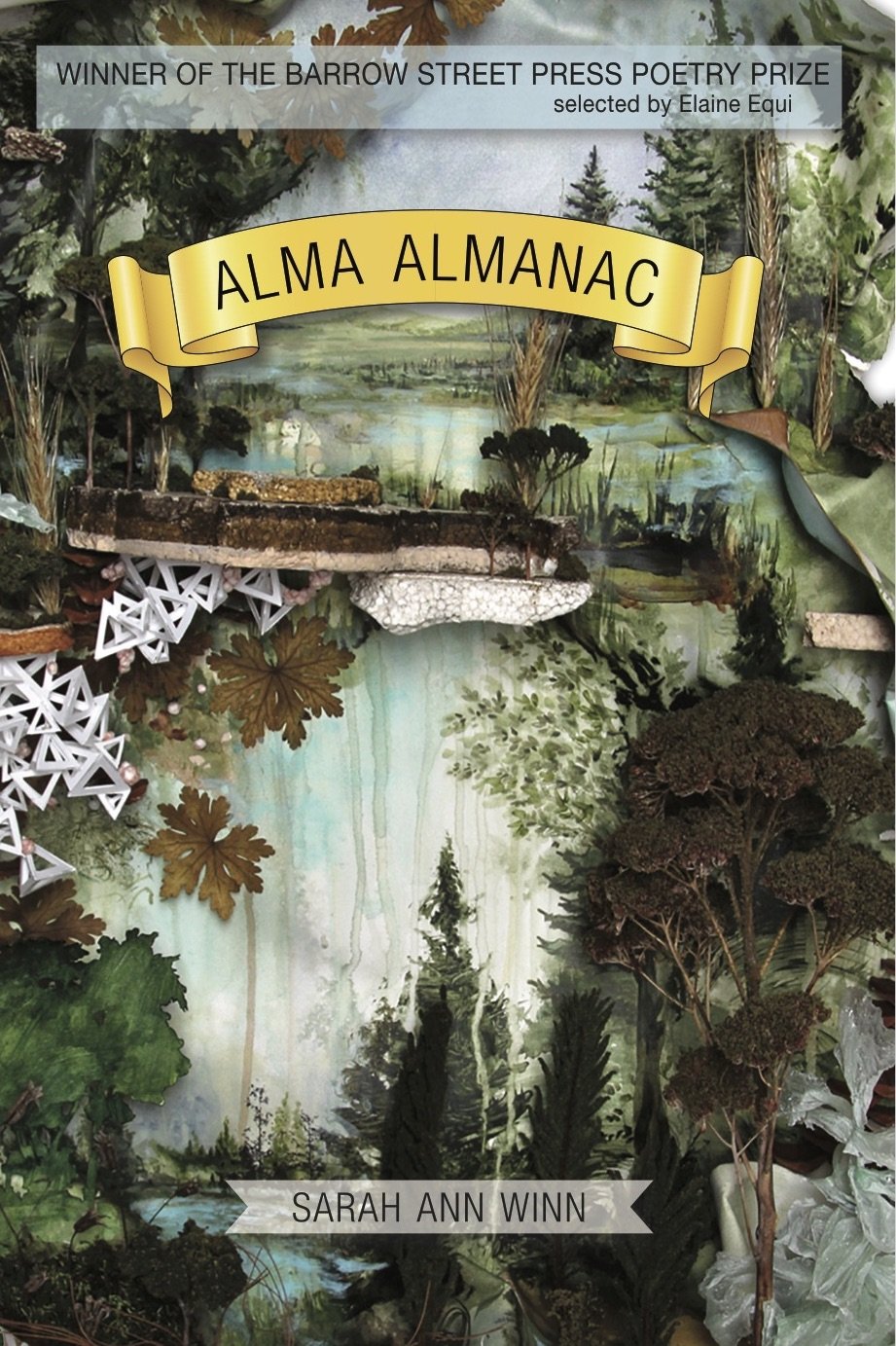 *Winner of the 2016 Barrow Street Book Prize, selected by Elaine Equi, and published by Barrow Street Press in 2017. Available here.

“Alma Almanac is a stunningly original collection of poems about landscape, place, and memory. It is a lyrical scrapbook of skies, weather, stars, myths, recipes, rituals, and spells. From it, one can learn “How to Haunt,” how “To Preserve November,” and even find “Instructions for Assembling a Bento Box Memorial.” In addition to the more traditional poems, the book is “illustrated” with a series of short descriptions of objects, photos, and remembered sounds. These stark fragments, labeled and numbered like catalogue items, give a sense of the poet as curator, arranging, displaying, and creating her own museum of personal effects. Rather than narrating what they’re supposed to mean, I admire the restraint of simply letting these powerful details speak for themselves. I can guarantee this book is very pleasurable to read, as sensual as “the spectrum of apple colors” and as insistent as an audio cassette of a woman’s voice that “whispers the same five words again and again. Promise me you won’t forget.””

“Sarah Ann Winn knows “darkness dilates,/never swallows us whole” and that the weight of memory is not its only force.  Alma Almanac is a guidebook for the conditions of its dark dilations; its instructions are accompanied by notes, beatitudes, mix tapes, imaginary figures, and lost wonders. These poems offer orientation by reaching into our desires and our imaginations.  These beautiful lyrics slow and expand time, their layered rhythms “unstung/by speed,” and initiate us not into miracle fantasies but into the visionary possible.”

“In Sarah Ann Winn’s Alma Almanac, I am struck by the absolute radiance of these poems. They are at once a documentary and a reverie, with amazing knowledge of, and reverence for, the world they offer the reader. It is a rich world, what Guy Davenport calls “the geography of imagination,” where each thing rhymes with another, where each burden’s echo is a blessing, a surprise, and a delight. Winn has found in the almanac a perfect form for the hybridity of her ambitious, intimate, and moving project.”

“Alma Almanac is a book you’ll want to share with everyone, reading out your favorite passages at breakfast and only barely suppressing the urge to point out images to strangers on the subway. Sarah Ann Winn’s sparkling and melancholy, tender and tough-minded, wistful and generous first full poetry collection is full to bursting with ode and elegy, music and objects—lakes, loons, nebulae, Easter baskets and x-rays, ghosts and government cheese, a moth mistaken for a mother and a mother for a moth, who “will not fly again once you touch her…” That last item may remind you of Elizabeth Bishop’s enigmatic Man-Moth. Now and again, you may sense Bishop’s presence—that rich self-forgetful imagination—in Winn’s “awful but cheerful” glimpses of immensity. But don’t get me wrong! Sarah Winn’s is a new exciting voice, unmistakably her own. I can’t wait to see what she’ll do next!”

Ever After the End Matter, Porkbelly Press, 2019 available here. *Nominated for Elgin Award!

“Some stories are unspeakable,” warns the opening poem of Ever After the End Matter (Porkbelly Press, 2019), and “in retelling…sometimes sisters fragment.” In this chapbook, Sarah Ann Winn offers an exquisitely curated collection of fairy-tale fragments, startling (and sometimes smoldering) scraps and remnants. […] Here artifacts suggest appetites, and with acute lyrical care, poems tell what longing can do to the body.”
-Sally Rosen Kindred
“In nineteen exhibits and appendices, Sarah Ann Winn catalogues the fairy tale world. Gretl is diagnosed with bulemia. “Snow White Under Glass” bemoans her “transparent hostage situation.” The tiny witches in a souvenir snow globe “refuse to answer questions” about their tattoos. Come one, come all: this fairy tale hall of mirrors is a delight to wander through.”
– Mary McMyne

*They gave me this shiny medal for my website for this win! <3

The Fem – “Glinda Watches the Wizard of Oz”

Glass Poetry’s Poets Resist – “All the While Watching”

Memory issue of Halfway Down the Stairs – “Delayed Exposure, Close to Home”

Hobart – “Tim Gunn Advises Wallace Stevens in the Project Runway Workroom,” “Self Portrait as Julia Child’s Canard a l’Orange,” “Half Off at the Night Market”

Lunch Ticket – “Our Lady of the Highways”

Massachusetts Review – “From the Wind Up Cathedral”

Rappahannock Review – “Cento for the Last House on Holland Island, Fallen into the Bay”

Stirring – “The Horsehead Nebula,” “The Museumobile,” “Ode to the Pull-off Between Havre de Grace and Exit 4B”

SWWiM – “How to Reach the Moon by Folding”

Three Drops from a Cauldron – “Kitsune”

Thrice Fiction – “How to Make Love Without Feeling”

An ongoing journey of the body, mind, and soul

The Write Magick
Poetry and Poverty
Crafted in Carhartt

about women who do amazing things

Just like the horse whisperer - but with more pages

Live to Write - Write to Live

We live to write and write to live ... professional writers talk about the craft and business of writing